Limited research has been conducted to describe the geographical clustering and distribution of prostate cancer (PrCA) incidence in Georgia (GA). This study describes and compares the temporal and geographic trends of PrCA incidence in GA with a specific focus on racial disparities.

GA Comprehensive Cancer Registry PrCA incidence data were obtained for 1998–2008. Directly standardized age-adjusted PrCA incidence rates per 100,000 were analyzed by race, stage, grade, and county. County-level hotspots of PrCA incidence were analyzed with the Getis-Ord Gi* statistic in a geographic information system; a census tract-level cluster analysis was performed with a Discrete Poisson model and implemented in SaTScan® software.

Significant (p < 0.05) hotspots of PrCA incidence were observed in nine southwestern counties and six centrally located counties among men of both races. Six significant (p < 0.1) clusters of PrCA incidence rates were detected for men of both races in north and northwest central Georgia. When stratified by race, clusters among white and black men were similar, although centroids were slightly shifted. Most notably, a large (122 km radius) cluster in northwest central Georgia was detected only in whites, and two smaller clusters (0–32 km radii) were detected in Southwest Georgia only in black men. Clusters of high-grade and late-stage tumors were identified primarily in the northern portion of the state among men of both races. 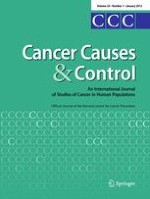 Effects of an exercise and hypocaloric healthy eating program on biomarkers associated with long-term prognosis after early-stage breast cancer: a randomized controlled trial

The association between cancer and amyotrophic lateral sclerosis

Comorbidities and endometrial cancer survival in Hispanics and non-Hispanic whites