Recently, vitamin D3 (1alpha, 25-dihydroxyvitamin D) has shown its capability to take part in many extraskeletal functions and its serum levels have been related to patient survival rate and malignancy of many types of neoplasms, including ovarian cancers. Catalytic iron is a free circulating form of iron that is able to generate reactive oxygen species and consequently to promote a number of cellular and tissutal dysfunctions including tumorigenesis. In fertile women an important source of catalytic iron is derived from retrograde menstruation. Epithelial secretory cells from fimbriae of fallopian tubes are greatly exposed to catalytic iron derived from menstrual reflux and so represent the site of origin for most serous ovarian cancers.
The aim of this study was to assess whether vitamin D3 can play a role in counteracting catalytic iron-induced oxidative stress in cells from fimbriae of fallopian tubes.

The cells, isolated from women undergoing isteroannessiectomy, were treated with catalytic iron 50-75-100 mM and vitamin D3 at a concentration ranging from 0.01 to 10 nM to study cell viability, radical oxygen species production, p53, pan-Ras, Ki67 and c-Myc protein expressions through Western Blot, and immunocytochemistry or immunofluorescence analysis.

The pre-treatment with vitamin D3 1 nM showed its beneficial effects that consists in a significant decrease in ROS production. In addition a novel finding is represented by the demonstration that pre-treatment with vitamin D3 is also able to significantly counteract tumoral biomarkers activation, such as p53, pan-Ras, Ki67 and c-Myc, and consequently the catalytic iron-induced cellular injury. 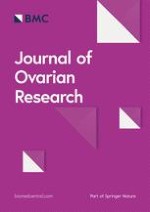 Targeting of topoisomerases for prognosis and drug resistance in ovarian cancer