The current study is an extension of our previous study where we tested the protective efficacy of gp63 and Hsp70 against murine visceral leishmaniasis. The cocktail vaccine was combined with MPL-A and ALD adjuvants and the protection afforded by the three vaccines was compared. Inbred BALB/c mice were immunized twice at an interval of two weeks with the vaccine formulations. Two weeks after the booster, they were challenged with 107 promastigotes of Leishmania donovani and sacrificed on 30, 60 and 90 days post infection/challenge. The protective efficacy of vaccines was analyzed by assessment of the hepatic and splenic parasite burden and generation of cellular and humoral immune responses. The immunized animals revealed a significant reduction in parasite burden as compared to the infected controls. These animals also showed heightened DTH response, increased generation of IgG2a, IFN-γ and IL-2 by spleen cells. This was also accompanied by a decrease in the levels of IgG1 and IL-10. Mice immunized with gp63+Hsp70+MPL-A exhibited significantly greater protection in comparison to those immunized with gp63+Hsp70+ALD. 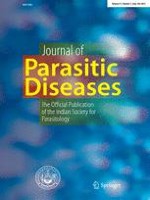 Balantidium coli in urine sediment: report of a rare case presenting with hematuria

Therapeutic management of sarcoptic mange in a sheep flock

A serological study of Leishmania infantum in dogs of Khorasan Razavi province, Iran

Unexpected reach of a leech