19 HCC patients with Child-Pugh class C cirrhosis received proton beam therapy. The hepatic tumors were solitary in 14 patients and multiple in five, and the tumor size was 25–80 mm (median 40 mm) in maximum diameter. No patient had regional lymph node or distant metastasis. Total doses of 50–84 Gy (median 72 Gy) in ten to 24 fractions (median 16) were delivered to the tumors.

Of the 19 patients, six, eight and four died of cancer, liver failure and intercurrent diseases, respectively, during the follow-up period of 3–63 months (median 17 months) after treatment. A remaining patient was alive with no evidence of disease 33 months after treatment. All but one of irradiated tumors were controlled during the follow-up period. Ten patients had new intrahepatic tumors outside the irradiated volume. The overall and progression-free survival rates were 53% and 47% at 1 year, respectively, and 42% each at 2 years. Performance status and Child-Pugh score were significant prognostic factors for survival. Therapy-related toxicity of grade 3 or more was not observed.

Proton beam therapy for HCC patients with severe cirrhosis was tolerable. It may improve survival for patients with relatively good general condition and liver function. 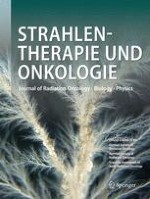 Is Short-Course Radiotherapy with High Doses per Fraction the Appropriate Regimen for Metastatic Spinal Cord Compression in Colorectal Cancer Patients?

Influence of Rectum Delineation (Rectal Volume vs. Rectal Wall) on IMRT Treatment Planning of the Prostate