The aim of this study was to evaluate local tumour control, incidence of radiation-induced glaucoma and associated interventions of sector-based and whole anterior segment proton beam therapy (PBT) for the treatment of iris melanoma.

We retrospectively analysed the data of 77 patients with iris melanoma who underwent PBT applied as 50 CGE in four daily fractions. Of the patients, 47 received PBT with a circular-shaped collimator and 30 with a conformal sector-shaped target volume. Local control, eye preservation and secondary glaucoma were evaluated. 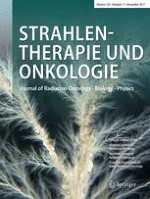