Polyarteritis nodosa (PAN) is a potentially life-threatening systemic vasculitis, which predominantly involves medium arteries. However, it may be difficult to diagnose PAN in its early stage. The aim of our study was to investigate the sensitivity and specificity of the American College of Rheumatology (ACR) and the Japanese Ministry of Health, Labour and Welfare (MHLW) criteria for the diagnosis of PAN in a single-centre retrospective cohort in Japan and to develop simplified criteria with favourable diagnostic performance. All patients with “PAN” or “suspicion of PAN,” as indicated on insurance forms, were included. The patient population was classified into PAN and non-PAN groups based on a retrospective chart review. The sensitivity and specificity of the ACR and MHLW criteria were calculated. Items that favourably discriminated the PAN group from the non-PAN group were determined and used as items for our provisional criteria. Thirteen cases of PAN and 24 cases without PAN were included in this study. The sensitivities of the ACR and MHLW criteria were 61.5% (8/13) and 30.8% (4/13), respectively, whereas the specificities were 79.2% (19/24) and 87.5% (21/24), respectively. We developed provisional criteria consisting of seven items, and found that a cut-off of ≥ 4 items had a sensitivity of 92.3% (12/13) and specificity of 91.7% (22/24) (p < 0.000001). The provisional seven-item criteria, developed in our real-world cohort of patients suspected of having PAN, had a high sensitivity and specificity and may be useful in the diagnosis of PAN, although it should be validated in additional patient populations. 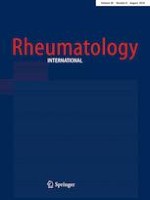 Peripheral neuropathy and health-related quality of life in patients with primary Sjögren’s syndrome: a preliminary report