The online version of this article (https://​doi.​org/​10.​1007/​s00259-019-04601-3) contains supplementary material, which is available to authorized users.
This article is part of the Topical Collection on Translational research 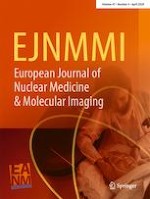 Availability of both [177Lu]Lu-DOTA-TATE and [90Y]Y-DOTATATE as PRRT agents for neuroendocrine tumors: can we evolve a rational sequential duo-PRRT protocol for large volume resistant tumors?