The PODCAD study aimed at assessing the degree of psychological stress that women experience due to notification of an abnormal Papanicolaou (Pap) smear finding or a positive human papillomavirus (HPV) test result.

We designed a survey to address the question of psychological burden due to abnormal Pap smear results and/or positive HPV tests. In this online campaign approach, we aimed to reach > 2000 women all over Germany irrespective of kind and number of abnormal screening findings. We asked for different kinds of anxiety, distress and uncertainty regarding both, Pap and HPV status.

A total of 3753 women completed the survey at least partially, and almost 2300 fully completed the survey. Of these, more than 50% were affected already since more than 1 year, and almost half of them had experienced at least three Pap smears in follow-up examinations. Almost 70% of the women were afraid of developing cancer. Intriguingly, almost half of the women with abnormal findings were not aware of their stage of the Pap smear. Furthermore, almost 30% of the women displayed signs of a post-traumatic stress disorder.

Abnormal results in cervical cancer screening have an impact on patients’ psychology, irrespective of the knowledge and severity of the findings. Better information concerning risks and benefits of cervical cancer screening and about the meaning of the outcome of its procedures are required to decrease this anxiety.
Begleitmaterial
Women’s fear concerning risks of conizations, such as preterm birth, after an abnormal Pap smear finding.
Indications for Post-traumatic stress disorder among women with abnormal Pap smear findings or positive HPV tests, as judged from their answers in the “Impact of Event Scale-Revised” part of the questionnaire.
Prices women are willing to pay for a clarification test.
Hinweise

Cervical cancer is the fourth most common cancer in women worldwide, with more than 500,000 new cases and > 260,000 deaths reported annually [1]. In developed countries, the established screening routines with Pap and/or HPV testing have led to a drastic decrease of incidence and mortality of cervical cancer over the last 5 decades.
On the other hand, both, Pap smear and HPV testing, have relatively low specificity [2‐4] leading to a high rate of women with abnormal Pap smear findings or positive HPV results without needing treatment. In Germany, Pap smear is still commonly used and, many women receive notification of abnormal Pap smear results [5]. Cervical cancer is caused by infection with high-risk HPV, and it develops very slowly via so-called cervical intraepithelial lesions. HPV is one of the most common sexually transmitted infections [6]. The fact that vaccination against infection with the most common types of cancer-causing HPV is available has increased the awareness of HPV infection. However, many women are still not aware of the connection between HPV infection and abnormal Pap smear results [7, 8].
Anzeige
Notification of an abnormal Pap smear finding psychologically impacts women, and previous research has aimed at assessing women’s health-related quality of life after such a notification [9‐11]. These studies have highlighted that abnormal Pap smear findings evoke negative emotions ranging from anxiety to fear of developing or even having cancer [11‐14]. The awareness of the infectious nature of HPV may even increase these emotions [11].
Only a few patients with abnormal Pap smear findings or HPV results are at risk to develop cancer. Most cervical lesions heal spontaneously within 2 years. Furthermore, HPV infections are mostly transient; they clear in about 90% of all cases without even developing a lesion. And in cases of prevalent lesions, neither the Pap smear nor the HPV test is able to distinguish between those lesions which will progress to cancer and those which will heal spontaneously.
As a consequence, Pap smear and/or HPV testing results in a very high number of women having abnormal screening results, and they will have to undergo follow-up testing and/or additional examination such as colposcopy and biopsies of the affected region until the abnormal finding disappears or a decision for surgery (i.e., conization) is made. This sequence of follow-up Pap smears and corresponding examinations such as colposcopies and even biopsies create a burden to women as they will have to stand the ongoing uncertainty whether cancer is already in progress or not.
Several studies are known which collected data from women having abnormal Pap smear findings [15‐19] or abnormal findings during screening routine in general [20, 21]. In these studies, study population was rather small, with two exceptions: (1) the TOMBOLA trial comprises 3331 women [18] and (2) Balasubramani and colleagues collected data from 1752 women, but limited to women who underwent colposcopy [22].
Anzeige
We hypothesized that the discussions in recent years regarding HPV infection and its possible prevention through vaccination as well as debates regarding new guidelines for cervical cancer screening would raise the awareness for the psychological burden of women affected. In 2020, Germany will shift from yearly opportunistic cytology screening to co-testing (cytology + HPV test) in three-yearly intervals for women 35 years and older. This will lead to more positive screening results as before because of the lower specificity of HPV testing. Therefore, the problem of psychological distress after positive screening results will be even more evident.
This study was funded by oncgnostics GmbH, a company that aims to commercialize DNA methylation markers. Study design and conception were developed by employees of oncgnostics GmbH.

The PODCAD was designed to obtain self-reported patient data on the real-life impact of recurrent abnormal Pap smear findings as well as the current use of the prevention and healthcare system in Germany.
It followed a semi-structured design, combining explorative questions with validated elements.
Participants went through a 37-item survey including the “Impact of Event Scale-Revised”—German Version as well as parts of the Cervical Dysplasia Distress [19, 20, 23] questionnaires, to evaluate the psychological and emotional burden of recurrent abnormal Pap smears.
This semi-structured approach was chosen to allow for the detection of completely independent signals. The complete questionnaire can be found in Supplementary Data 1 and it was assented by the ethics committee of the University Hospital Jena.

The PODCAD survey was conducted in two waves during May and June 2018 in Germany and addressed participants purely through an online campaign including channels like display marketing (banner), Search Engine Marketing (i.e., google search) and by link-sharing through the prevention and education campaign F*ck Cancer by “Myriam von M” on facebook (@Myriam.von.M), a community which operates since the beginning of 2014. The PODCAD survey-related online campaign asked, ‘Help us to better understand affected women, a survey on conspicuous PAP/HPV findings.’

Population and Characteristics of participants

A total of 3753 women completed the survey at least partially within 9 weeks. The survey population showed a mean age of 31.8 years and approximately 35.3% of the participants stated to plan for children/additional pregnancies.
Anzeige
To understand the differences between pre-organized (F*ck Cancer Community) and spontaneous participants (from online marketing activities), an interim analysis was conducted comparing the pattern of 902 vs. 89 datasets from the respective groups. This interim analysis did not reveal any significant differences except for a higher proportion (40.6% vs. 34.8%) of women with active family planning attitude in the Online Marketing cohort. We interpreted this to be the main driver for the actual web research activity. In conclusion, both cohorts can be analyzed together.
The results presented below are based on approximately 2300 complete surveys which fulfilled quality criteria and represented the target population, women with at least one abnormal Pap smear. However, almost half (46.6%) of the participating women indicated that they had 3–5 (32.1%) or even more (14.5%) conspicuous Pap smears (Table 1). More than half of the women (53.1%) have already been affected for more than 1 year and claimed to be burdened by the conspicuous Pap smear results.
Table 1
Number of suspicious cytology test results
Although only 40.9% seemed to know their exact Pap smear findings (Table 2), more than 2 out of 3 women (69.3%) stated to be afraid of developing or being diagnosed with cervical cancer, and almost half (49.4%) expressed that they were even afraid to die of cancer (Fig. 1). Finally, it is worth to note that the knowledge about the Pap smear results seems to be largely independent of the level of education/degree.
Table 2
Distribution of different cytology findings among women who knew the actual cytology result (40.9% of all participants)
×

In consideration of the ongoing and unclear situation of conspicuous results, more than two-third of the women with abnormal Pap smear findings (69.9%) and more than ¾ of the participating women with positive HPV test result (76.4%) expressed to be at least “rather concerned” (Scores 3, 4 and 5 on a 5-point scale—Fig. 2) about the findings, respectively. 26.7% (PAP) and 30.7% (HPV) reported to be even “severely concerned” (Score 5 on a 5-point scale—Fig. 2).
×

In addition, women who claimed to still be planning pregnancies show a significantly higher burden (average score 3.96 vs. 1.96—Fig. 3), irrespective of their age. Nearly half of the participants (48.1%) stated that the risk of conizations as well as the risk of preterm birth is important to them and “clearly” to “severely” impacting their life (Scores 4 and 5 on a 5-point scale—Fig. 4, supplemental data). In one of the four participants (25%) this has already influenced the family planning.
×
In conclusion, more than half of the participants (53.1%) have to deal/cope with the described situation and conspicuous Pap/HPV findings for more than 1 year.

Women suffering from positive Pap- or HPV test results are clearly seeking clarification. If there would be a test which could clarify their situation, 98% would want to receive such additional testing. Of these, more than half (56.6%) are willing to pay themselves for a clarification test, 35.9% are possibly willing to pay. Women still in family planning phase would pay more than women not planning further pregnancies (Fig. 6, supplemental data).

From the PODCAD survey, we conclude that in Germany, the psychological distress during recurrent diagnostics cycles within conspicuous Pap/HPV findings is unmet or uncontrolled in a significant proportion of the patients. The PODCAD survey exposed a large proportion of conspicuous Pap/HPV “sufferers” who have apparently unmet needs for a clear prognosis or diagnosis. The burden was often felt to be higher in the context of family planning. The survey concluded with the question, if the participants would be willing to perform an additional test to receive a clear “cancer: yes/no” result and 98% would want to undergo additional testing. Of these, 92.5% would even pay ≥ 50€ for such a clarification test. A positive family planning history leads to even significantly higher willingness for additional testing.

Open Access funding provided by Projekt DEAL. The authors would like to thank the participants in the study. We thank Myriam von M for her contribution in setting up this project and for recruiting the majority of the participants for this study.

MJ and PH declare no conflicts of interest. RL and ND are employees of DontBePatient gGmbH. MS and AH are shareholders and employees of oncgnostics GmbH, a company that aims to commercialize DNA methylation markers.

All participants were addressed purely through an online campaign. The PODCAD survey-related online campaign asked, ‘Help us to better understand affected women, a survey on conspicuous PAP/HPV findings.’

Ethics committee of Jena University hospital, April 09th 2018, reference number 5500-04/18.
Open AccessThis article is licensed under a Creative Commons Attribution 4.0 International License, which permits use, sharing, adaptation, distribution and reproduction in any medium or format, as long as you give appropriate credit to the original author(s) and the source, provide a link to the Creative Commons licence, and indicate if changes were made. The images or other third party material in this article are included in the article's Creative Commons licence, unless indicated otherwise in a credit line to the material. If material is not included in the article's Creative Commons licence and your intended use is not permitted by statutory regulation or exceeds the permitted use, you will need to obtain permission directly from the copyright holder. To view a copy of this licence, visit http://​creativecommons.​org/​licenses/​by/​4.​0/​. 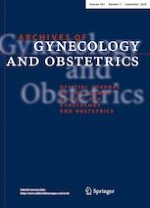 Use of fertility treatments in BRCA1/2 mutation carriers and risk for ovarian and breast cancer: a systematic review

Effect of zinc supplementation on quality of life and sleep quality in young women with premenstrual syndrome: a randomized, double-blind, placebo-controlled trial