It is common to repeat prostate-specific antigen (PSA) measurements for men with intermediate PSA elevation before prostate biopsy. In this scenario, men with persistently elevated PSA values may have considerable psychological distress. We attempted to determine whether elevated PSA values have psychological effects on these men in association with the timing of measurement, PSA kinetics, and biopsy results.

In order to investigate the initial and late effects of PSA tests on psychological distress during serial measurements, two groups of men with screen-positive results (PSA ≥3 ng/ml) were studied—205 men whose first questionnaires regarding anxiety and depression were taken at initial screening (group A), and 103 men whose questionnaires were taken at repeated measurement for prior PSA elevation (group B).

The level of distress was generally low. There were no significant differences in distress between the two groups, suggesting a constant psychological effect by elevated PSA values over a long period of time. The distress of men in group A increased significantly as PSA levels rose and decreased when they fell to normal range. On the other hand, the distress of men in group B did not change regardless of PSA kinetics, indicating that their psychological condition seemed susceptible to subtle PSA change only in the initial phase of measurements. Unexpectedly, men with benign results showed insignificant but higher distress after prostate biopsy.

Although a small fraction of men have psychological distress caused by changes in PSA levels, the benefits, risks (psychological and physical), and limitations of PSA tests must be adequately explained to the patients before entering the screening program. 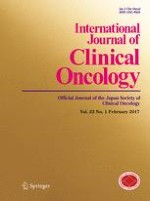 A phase III multicenter, randomized, controlled study of combined androgen blockade with versus without zoledronic acid in prostate cancer patients with metastatic bone disease: results of the ZAPCA trial

Expression of a novel endothelial marker, C-type lectin 14A, in epithelial ovarian cancer and its prognostic significance