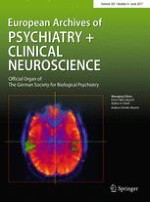 Gender does matter in clinical research

The relationships of personal resources with symptom severity and psychosocial functioning in persons with schizophrenia: results from the Italian Network for Research on Psychoses study

Stigmatization of psychiatric symptoms and psychiatric service use: a vignette-based representative population survey

Treatment recommendations for schizophrenia, major depression and alcohol dependence and stigmatizing attitudes of the public: results from a German population survey

Validity of remission and recovery criteria for schizophrenia and major depression: comparison of the results of two one-year follow-up naturalistic studies

A trans-diagnostic approach to psychosis, psychiatric medication nomenclature and stigma