To investigate prospective associations between working conditions and depressive symptoms in Swedish men and women.

The study was based on SLOSH (N = 5,985), a follow-up of a representative sample of gainfully employed Swedes 16–64 years of age from the Swedish Work Environment Survey 2003. Work demands, decision authority, support and conflicts at work were measured in 2003. Depressive symptoms were recorded in 2006 by a short version of the depression subscale of the Symptom Checklist 90 (SCL-90). Linear regression analyses were performed.

The study supports the theory that decision authority, support and conflicts at work are predictive of depressive symptoms in the general Swedish working population. 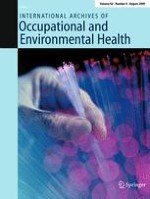 A short generic measure of work stress in the era of globalization: effort–reward imbalance

Causes and types of health effects during the use of crop protection chemicals: data from a survey of over 6,300 smallholder applicators in 24 different countries

Interpreting epidemiological evidence in the presence of multiple endpoints: an alternative analytic approach using the 9-year follow-up of the Seychelles child development study

Evaluation of urinary biomarkers of exposure to benzene: correlation with blood benzene and influence of confounding factors