Research into the psychological consequences of rape on women in war and warlike situations is limited. The aims of this study were (a) to describe the prevalence and the nature of PTSD symptoms among Yazidi women reporting rape during IS captivity, (b) to describe comorbidity of other psychological disorders, and (c) to examine the risk factors associated with posttraumatic stress disorder.
The study included 296 Yazidi women survivors of rape and has been conducted in Germany since January 2016 as part of a special-quota project in the German region of Baden-Wuerttemberg, designed to support the women and children who have escaped after being held hostage by IS.
The survivors were recruited into a retrospective, cross-sectional study. Interviews in Germany were done through trained personnel to evaluate the mental health status of raped women.
All the investigated women had been raped many times during IS captivity. About 82% of the women were also physically tortured. Of the sample, 67% suffered from somatoform disorder, 53% suffered from depression, 39% from anxiety, and 28% from dissociation. The prevalence of PTSD in those with rape events of more than 20 times was 57% (95% CI = 35.1–65.9%), less than 20 times was 41% (95%, CI = 28.7–4.8% and less than 10 times 39% [95% CI = 28.2–41.8%], respectively.
The IS captivity and wartime rapes had deep immediate and long-term consequences on the mental health of women survivors. The high prevalence of PTSD emphasizes the need for culturally sensitive diagnostic and therapeutic services to address the intermediate and long-term consequences of wartime rape. 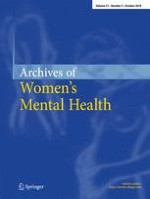 Effectiveness of self-help psychological interventions for treating and preventing postpartum depression: a meta-analysis