High dependency care (HDC) is a level of care situated between intensive care and usual ward care with its delivery being independent of location. Inadequate definition makes it problematic to determine the number of children receiving HDC, to identify their care setting and therefore to undertake service planning. We aimed to estimate the volume of hospital inpatient HDC in a geographically defined population using a customised measurement tool in four types of paediatric hospital services (1) tertiary specialist wards, (2) tertiary paediatric intensive care units, (3) district general hospitals (DGHs) general wards and (4) wards at a major acute general hospital. A region-wide prospective cohort study during 2005 collected data to develop a 36-item HDC measurement tool, which then identified children receiving HDC by day and night. The cohort identified 1,763 children as receiving HDC during an admission to 1 of 36 hospital wards in 14 hospitals. HDC was delivered during 9,077 shift periods of 12 h or 4,538 bed days. The volume of care and patient profiles varied by hospital type, within hospital by ward type and by age and season. Tertiary specialist wards and ICUs provided 72% of HDC, with the remainder delivered at the DGHs and the major acute general hospital. The volume of admissions to tertiary specialist wards showed little seasonality and children tended to be older (26% were aged 10–15 years). By comparison, admissions to DGHs were younger with an excess during the winter months. This is the first UK study to quantify HDC from empirical data encompassing all hospital and ward types within a large clinical network. A lack of HDC-designated beds across the region resulted in HDC delivery on all types of hospital wards. The study size and representativeness makes the estimated number of HDC bed days per head of population likely to reflect the wider UK population. 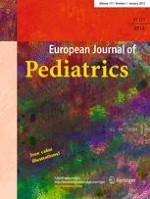 Magnetic resonance imaging of the brain in adenylosuccinate lyase deficiency: a report of seven cases and a review of the literature

Drawings of very preterm-born children at 5 years of age: a first impression of cognitive and motor development?

What dose of intravenous immunoglobulin should be administered in Kawasaki disease with suspected systemic capillary leak syndrome?