To present a semi-automatic method with minimal user interaction for quantitative analysis of the patellofemoral motion pattern.

4D CT data capturing the patellofemoral motion pattern of a continuous flexion and extension were collected for five patients prone to patellar luxation both pre- and post-surgically. For the proposed method, an observer would place landmarks in a single 3D volume, which then are automatically propagated to the other volumes in a time sequence. From the landmarks in each volume, the measures patellar displacement, patellar tilt and angle between femur and tibia were computed.

A semi-automatic method suitable for quantification of the patellofemoral motion pattern as captured by 4D CT data has been presented. Its observer variability is on par with that of other methods but with the distinct advantage to support continuous motions during the image acquisition. 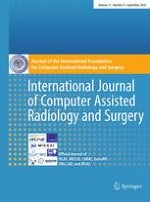