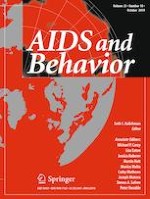 ‘My Tablets are on Top of the Fridge’: The Roles of Relationship Desire and Medical Mistrust in ART Adherence for HIV-Positive MSM and Transgender Women Living in Rural South Africa

Suboptimal HIV Pre-exposure Prophylaxis Awareness and Willingness to Use Among Women Who Use Drugs in the United States: A Systematic Review and Meta-analysis