To assess Veteran satisfaction with VA health care by race/ethnicity and gender.

Interviews were completed for 1222 of the 1929 Veterans known to be eligible for the interview (63.3%), including 421 white, 389 black, and 396 Hispanic Veterans, 616 of whom were female. Veterans were less likely to be somewhat satisfied or less than satisfied versus very satisfied with care in each of the 16 domains. The highest satisfaction ratings were reported for costs, outpatient facilities, and pharmacy (74–76% very satisfied); the lowest ratings were reported for access, pain management, and mental health care (21–24% less than satisfied). None of the joint tests of racial/ethnic or gender differences in satisfaction (simultaneously comparing all three satisfaction levels) was statistically significant (p > 0.05). Pairwise comparisons of specific levels of satisfaction revealed racial/ethnic differences by gender in three domains and gender differences by race/ethnicity in five domains, with no consistent directionality across demographic subgroups.

Our multisite interviews of a diverse sample of Veterans at primarily minority-serving sites showed generally high levels of health care satisfaction across 16 domains, with few quantitative differences by race/ethnicity or gender. 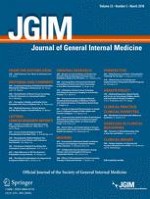 Barriers to and Facilitators of Alcohol Use Disorder Pharmacotherapy in Primary Care: A Qualitative Study in Five VA Clinics

Collaborative Care for Depression among Patients with Limited English Proficiency: a Systematic Review

JGIM Embraces Your Work on Substance Use

Ethical Issues in the Design and Implementation of Population Health Programs