Pneumonitis and fibrosis constitute serious adverse effects of radiotherapy in the thoracic region. In this study, time-course and dose-dependence of clinically relevant parameters of radiation-induced lung injury in C57BL/6J mice were analyzed. A well-characterized disease model is necessary for the analysis of the cellular and molecular mechanisms using genetically modified mice. 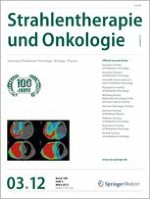 The combination of hyperthermia or chemotherapy with gimeracil for effective radiosensitization