Radiation-recall dermatitis is the occurrence, with subsequent administration of cytotoxic chemotherapy, of an acute inflammatory toxicity in a previously quiescent radiation field. It may occur from days to weeks, and sometimes years, after the radiation therapy. The precise mechanism is unknown. One hypothesis suggests that the initial radiation therapy leads to a depletion of tissue stem cells within the irradiated field and that subsequent cytotoxic chemotherapy exposure causes a ‘remembered’ reaction among the remaining surviving cells. An alternative proposition suggests that radiation induces heritable mutations within surviving cells, which then produce a subgroup of defective stem cells that are unable to tolerate the second insult of chemotherapy. Recently, ataxia telangiectasia gene mutation and protein kinase deficiency have been associated with patients who have increased susceptibility to severe radiation-induced skin toxicity.
Most of the lesions will heal with supportive treatment. Although some reports have noted that radiation-recall dermatitis recurred with subsequent continued administration of the same chemotherapeutic agent, such experience is not universal. At present, a decision as to whether the same chemotherapeutic agent can be continued will usually be determined by the severity of the initial reaction, the chemoresponsiveness of the tumor to this particular agent, the individual patient’s wishes, and a clinical judgment that takes into account the availability of alternative therapy. 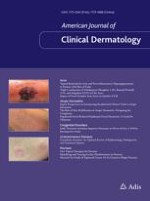