Neuroblastoma (NBL) is the most common extracranial solid tumor in children. Despite a good overall prognosis in NBL patients, the outcome of children with stage 4 disease, even with multimodal intensive therapy, remains poor. The role of extended surgical resection of the primary tumor is in numerous studies controversial. The aim of this study was to retrospectively analyze the impact of radical surgical resection on the overall- and event-free survival of stage 4 NBL patients.

We retrospectively analyzed patient charts of 40 patients with stage 4 NBL treated in our institution between January 1990 and May 2012. All clinical and pathological findings of stage 4 NBL patients were included. Extent of surgery was assessed from the operation records and was classified as non-radical (tumor biopsy, partial 50–90% resection) or radical (near-complete >90% resection, complete resection). Overall- (OS) and event-free (EFS) survival was assessed using the Kaplan–Meier analysis and log-rank test. A multivariate Cox regression analysis was used to demonstrate independency.

In total, 29/40 patients were operated radically (>90% resection), whereas 11 patients received subtotal resection or biopsy only. OS and EFS were significantly increased in patients with radical operation compared with non-radical resection (p = 0.0003 for OS, p = 0.004 for EFS; log-rank test). A multivariate Cox regression analysis revealed radical operation as a significant and independent parameter for OS and EFS.

Our data indicate that radical (over 90% resection) surgery improves OS and EFS in stage 4 NBL patients. 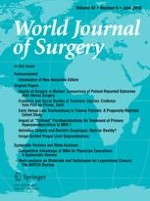 Innovative Surgical Techniques Around the World

Pattern of Lower Intestinal Ostomies in a Low-Income Country: Case of Southeast of Niger Republic