Radiofrequency identification (RFID) tag localization (TL) is a technique of localizing non-palpable breast lesions that can be performed prior to surgery. We sought to evaluate whether TL is comparable to wire localization (WL) in regard to specimen size, operative time, and re-excision rate.

A retrospective cohort analysis was performed on TL and WL excisional biopsies and lumpectomies performed by 5 surgeons at 2 institutions. Cases were stratified by surgery type and surgical indication. Associations between localization technique and specimen volume, operative time, and re-excision rate were assessed by univariate and multivariate analyses.

TL has similar surgical outcomes to WL with added benefit that TL can occur prior to the day of surgery. TL is an acceptable alternative to WL and should be considered for non-palpable breast lesions. 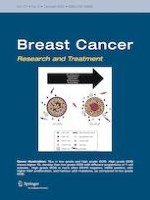 Correction to: Schlafen-11 expression is associated with immune signatures and basal-like phenotype in breast cancer