Twenty-five suspected cocaine smugglers (13 males, 12 females, average age 38 years) underwent abdominal plain film radiography for drug detection between 2010 and 2014. Ten of them also underwent a CT scan. Eight were found to be smuggling cocaine powder and 17 were found to be smuggling liquid cocaine. We identified two new imaging characteristics unique to intracorporeal liquid cocaine on both plain films and CT scans, and compared them to the radiological features of cocaine powder.

The radiological features of intraabdominal liquid cocaine packets on plain abdominal films (n = 17) were similar in opacity to bowel content and had an irregular shape that conformed to the intestinal contour. We identified what we termed “thin lucent lines” that were created by gas trapped between the packets. Four CT scans revealed that liquid cocaine was hyperdense compared to bowel content, that the packets had irregular shapes, and that the gas trapped between the packets formed a “jigsaw” pattern, a heretofore non-described finding that was present in all four scans.

Liquid cocaine has several unique imaging features that assist its detection on abdominal plain film. A CT scan can assist detection in inconclusive cases by demonstrating hyperdense irregular packets of liquid cocaine and a “jigsaw” pattern of gas between them. 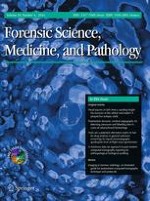 In “Re”-consideration of subspecialty training in forensic anthropology for pathologists

Cardiac fibroma presenting as sudden unexpected death in an adolescent

The law and the laboratory