Seventy-three consecutive patients (39 males and 34 females; mean age 25.2 years ± 10.2) who underwent anatomic ACL reconstruction were retrospectively reviewed. Femoral condyle width was measured using a pre-operative anteroposterior (AP) radiograph of the operative knee. Lines were drawn through the anatomic axis of the femur, as well as perpendicularly through the condyles. Bicondylar width was measured as the maximum width across both the medial and lateral femoral condyles utilizing this perpendicular line. The ACL insertion site lengths (in the AP direction) of both the tibia and the femur were measured intra-operatively using a commercially available arthroscopic ruler.

A simple radiographic measurement of femoral bicondylar width can predict intra-operative tibial and femoral insertion site sizes, which has the potential to assist surgeons in performing individualized ACL reconstruction in cases where MRI scan is unavailable. 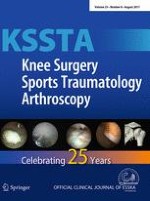 Influence of graft source and configuration on revision rate and patient-reported outcomes after MPFL reconstruction: a systematic review and meta-analysis