Malreduction in the axial plane (malrotation) following tibial fracture surgery is often undiagnosed. A few clinical and radiographic methods have been proposed for measuring tibial rotation intraoperatively, yet have failed to match the accuracy of computed tomography (CT). The aim of this study was to develop radiographic tools for future intraoperative assessment of the tibial shaft rotation profile.

The setting was a laboratory computerized analysis. Twenty lower limb CT scans were used to construct a three-dimensional (3D) model using AMIRA© software. A virtual 3D cylinder was implanted in the posterior condylar line and in the transmalleolar axis. The 3D models were used to simulate four standard knee and ankle plain radiographs. On each radiograph, four landmarks were depicted by two observers and their relation with the cylinder was measured and analyzed for accuracy and reproducibility. A cadaveric lower leg was implanted with two Kirschner wires. A CT scan was performed in addition to 2D fluoroscopy. The simulated radiographs and the fluoroscopy were compared for accuracy.

To date, no reliable and common methods have been reported for the evaluation of tibial axial rotation. We propose a model in which simple radiographic landmarks can be used to calculate a 3D coordinate system that accurately assesses the axial rotation angle of the tibial shaft. 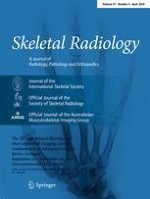 Symptomatic os talus secundarius: a case report and review of the literature

Lipoma arborescens of the bicipitoradial bursa

Thank you to our reviewers of 2017