Although laparoscopic intra-peritoneal mesh repair (LVHR) is a well-established treatment option to repair ventral and incisional hernias, no consensus in the literature can be found on the best method of fixation of the mesh to the abdominal wall.

Between December 2004 and July 2008, 76 patients undergoing a LVHR were randomized between mesh fixation using a double row of spiral tackers (DC) (n = 33) and mesh fixation with transfascial sutures combined with one row of spiral tackers (S&T) (n = 43), in the WoW trial (with or without sutures). Patients were clinically examined and evaluated using a visual analog scale for pain (VAS) in rest and after coughing 4 h post-operatively, after 4 weeks and 3 months after surgery. Primary endpoint of the study was abdominal wall pain, defined as a VAS score of at least 1.0 cm, at 3 months post-operative. Quality of life was quantified with the SF-36 questionnaire preoperatively and after 3 months. Secondary endpoint was the recurrence rate at 24-month follow-up.

We found that double-crown fixation of intra-peritoneal mesh during laparoscopic ventral hernia repair was quicker, was less painful immediately post-operative and after 3 months, and did not increase the recurrence rate at 24 months. In hernias at a distance from the bony borders of the abdomen, transfascial sutures can be omitted if a double crown of tackers is placed.
Anzeige 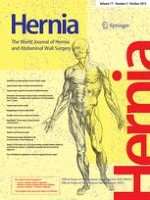 The danger of performing meta-analysis and the impact of guidelines

Impact of the defect size, the mesh overlap and the fixation depth on ventral hernia repairs: a combined experimental and numerical approach