Following SG, eligible patients were randomized to a control group who did not receive UDCA treatment or to a group who were prescribed 300 mg UDCA twice daily for 6 months. Gallbladder ultrasounds were performed preoperatively and at 6 and 12 months postoperatively. Patients with positive findings preoperatively were excluded from the study. Compliance with UDCA was assessed.

Between December 2011 and April 2013, 37 patients were randomized to the UDCA treatment arm and 38 patients were randomized to no treatment. At baseline, the two groups were similar. At 6 months, the UDCA group had a statistically significant lower incidence of gallstones (p = 0.032). Analysis revealed no significant difference in gallstones between the two groups at 1 year (p = 0.553 and p = 0.962, respectively). The overall gallstone formation rate was 29.8 %.

The incidence of gallstones is higher than previously estimated in SG patients. UDCA significantly lowers the gallstone formation rate at 6 months postoperatively. 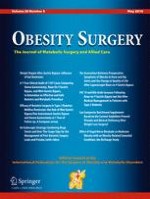 Response to the Comment on: Common Limb Length Does Not Influence Weight Loss After Standard Laparoscopic Roux-en-Y Gastric Bypass

Usefulness of Upper Gastrointestinal Symptoms as a Driver to Prescribe Gastroscopy in Obese Patients Candidate to Bariatric Surgery. A Prospective Study