Four of the six coronaviruses (CoVs) that have made the transition from mammalian/avian hosts to humans are endemic in the human population, and typically associated with mild, self-limiting respiratory illness [ 1]. However, the remaining two human CoVs cause severe respiratory syndromes and are associated with considerable mortality [ 1]. In 2003, the severe acute respiratory syndrome (SARS)-CoV caused a disease outbreak that claimed nearly 800 lives [ 2], and for the second consecutive decade this century, a new human CoV has emerged. The Middle East Respiratory Syndrome (MERS)-CoV was first isolated from a 60-year-old man in Saudi Arabia in June 2012 [ 3]. Three years later, it has been responsible for the infection of more than 1300 individuals in 26 countries, and more than 480 related deaths [ 4].
Of all the cases of MERS-CoV reported to date, three quarters have occurred within the source country of Saudi Arabia (Table  1) [ 4]. Aside from a moderate outbreak in the United Arab Emirates (UAE), travel-associated spread to other countries in the Middle East, as well as examples in Europe, North America, Africa and Asia, has typically resulted in very minimal local outbreaks. The clear exception to this is situation in the Republic of Korea, where over 180 cases have been reported, all during 2015 [ 4]. Infection in the index case followed recent travel to Saudi Arabia, Qatar, UAE and Bahrain [ 5]. An International Health Regulations Emergency Committee has highlighted five main factors contributing to the spread of MERS-CoV in the Republic of Korea [ 6]. Briefly, these were (1) a lack of awareness among healthcare workers and the general public; (2) suboptimal infection prevention and control measures in hospitals; (3) crowded emergency rooms and multi-bed hospital rooms; (4) the practice of patients seeking care at multiple hospitals; (5) multiple visitors staying with infected patients in hospital rooms.
Table 1
Number of laboratory-confirmed cases of MERS-CoV reported to WHO, by country and year
Data as of 7 July 2015 [ 4]
MERS- CoV Middle East respiratory syndrome coronavirus, WHO World Health Organization
Anzeige
Overall, clinical experience with MERS-CoV indicates that its spread within the human population requires close contact; the majority of cases have resulted from human-to-human transmission in healthcare settings [ 7]. There is good potential for outbreaks to be contained, given suitable levels of awareness and hygiene. The latest outbreak in Korea, however, is testament to the cost of neglecting these basic requirements. A recent study by our group demonstrated impressive, rapid virucidal activity of povidone iodine (PVP-I) against the Ebola virus (EBOV) [ 8]. PVP-I was also effective against the European reference virus (Modified vaccinia virus Ankara; MVA), which was determined to be a suitable surrogate test agent, facilitating the safe testing of the virucidal activity of antiseptic products against hazardous pathogens, including enveloped viruses such as EBOV [ 8]. PVP-I is a broad-spectrum antimicrobial, used globally in the medical field—including the Middle East—as a disinfectant for skin, hands and mucosal surfaces as well as for wound treatment and eye applications [ 9].
It may be hypothesized that PVP-I would also demonstrate effective disinfectant properties against MERS-CoV. The study reported here evaluated skin cleanser, surgical scrub and gargle/mouthwash formulations of PVP-I for virucidal activity against both the reference virus MVA and MERS-CoV itself.

Three PVP-I antiseptic products were tested in this study: 4% PVP-I skin cleanser, 7.5% PVP-I surgical scrub and 1% PVP-I gargle/mouthwash, each with the brand name Betadine, manufactured by Mundipharma (Limburg, Germany). This article does not contain any new studies with human or animal subjects performed by any of the authors.

Propagation of the Test Virus

Methodology for propagation of MVA was as described in [ 8]. Briefly, baby hamster kidney cells (BHK)-21 cells (cell bank of Friedrich-Loeffler-Institute, Germany) were infected with MVA (Institute of Animal Hygiene and Veterinary Public Health, University of Leipzig, Germany) and cultured at 37 °C in a humid atmosphere under 5.0% CO 2. The virus was cultivated from confluent monolayers with a maximum age of 2 days.

Cultivation of MERS-CoV was based on the same overall method as for MVA. The MERS-CoV, HCoV-EMC/2012 (Erasmus Medical Center, Rotterdam, The Netherlands) was used as the test virus. Vero E6 cells (American Type Culture Collection, ATCC) were used for virus cultivation and the suspension test.

Tests were carried out once in accordance with EN14476:2013/FprA1:2015 at 20 ± 1 °C [ 10]. The test assay comprised 100 µL virus suspension, 100 µL interfering substance (clean, 0.3 g/L bovine serum albumin [BSA] or dirty, 3.0 g/L BSA + 3.0 mL/L erythrocytes) and 800 µL PVP-I product (undiluted, 1:10 or 1:100 dilution). A virus control mixture was also assessed using double-distilled water in place of the test product. After the specified contact time (15, 30 or 60 s), virucidal activity was immediately suppressed by dilution with nine volumes of ice-cold medium (minimal essential medium + 2.0% fetal calf serum) and serially diluted tenfold. Infectivity was determined by means of end point dilution titration in microtiter plates. Aliquots of 100 μL from each dilution were added to six 200 μL samples of BHK-21 cells. Cultures were examined microscopically for cytopathic effects (CPE) after 8 days of inoculation.
Anzeige
The virus titers were determined using the Spearman–Kärber method [ 11, 12] and expressed as tissue culture infectious dose 50% (TCID 50/mL). The virucidal activity was determined by the difference of the logarithmic titer of the virus control minus the logarithmic titer of the test virus (Δ log 10 TCID 50/mL). This difference is presented as a reduction factor (RF) including its 95% confidence interval (CI). A reduction in virus titer of ≥4 log 10 (corresponding to an inactivation of ≥99.99%) was regarded as evidence of sufficient virucidal activity. The calculation was performed according to EN14476 [ 10].

In accordance with EN14476:2013/FprA1:2015, the inactivation tests were conducted once, at 20 ± 1 °C [ 10]. One part MERS-CoV suspension (100 µL) was mixed with 100 µL of either 0.3 g/L BSA (clean conditions) or 3.0 g/L BSA + 3.0 mL/L erythrocytes (dirty conditions) as the interfering substance. The virus–protein mixture was added to 8 parts (800 µL) of the undiluted test product. After a contact time of 15 s, 20 µL of the test mixture was added to 99.98 mL ice-cold medium. Aliquots (300μL) of the diluted sample were then added to 336 wells containing the indicator cells. The cells were cultivated for 5 days, and then inspected microscopically after 3 and 5 days for virus-induced CPE in cell morphology. Calculations of viral titer (in cases of no virus or low viral count) were as detailed in [ 8].

The outbreak of MERS-CoV in the Republic of Korea is testament to the ongoing risk of healthcare-associated transmission, and reinforces the need for timely diagnosis and implementation of prevention and control measures. The three PVP-I products tested in this study demonstrated virucidal activity against MVA and MERS-CoV at room temperature, within only 15 s of exposure. This was observed under both clean and dirty conditions. These data are consistent with those from other studies demonstrating the excellent virucidal activity of PVP-I against enveloped viruses.
The data reported here indicate that PVP-I-based hand wash products for potentially contaminated skin, together with PVP-I gargle/mouthwash for reduction of viral load in the oral cavity and the oropharynx, may help to support hygiene measures during outbreaks of respiratory viruses.

JZ is an employee of Mundipharma Research GmbH & Co. KG and has no other financial or non-financial competing interests. MEg and ME have nothing to disclose.

This article does not contain any new studies with human or animal subjects performed by any of the authors. 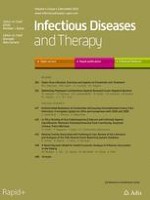 Ebola Virus Infection: Overview and Update on Prevention and Treatment

Antimicrobial Resistance of Escherichia coli Causing Uncomplicated Urinary Tract Infections: A European Update for 2014 and Comparison with 2000 and 2008

Erratum to: A Novel Dynamic Model for Health Economic Analysis of Influenza Vaccination in the Elderly

Adverse Events Associated with Fosfomycin Use: Review of the Literature and Analyses of the FDA Adverse Event Reporting System Database