Endometrial cancer accounts for 3.9% of all female cancers globally, and its incidence appears to be increasing in women under 40 years of age. This paper investigated ethnic-specific trends in endometrial cancer across different age groups in New Zealand.

Women who were diagnosed with endometrial cancer between 1996 and 2012 were identified from the New Zealand Cancer Registry. Annual age-standardized incidence and mortality rates were calculated for each ethnicity (Māori, Pacific, and non-Māori non-Pacific) in four age groups (< 40, 40–49, 50–74, and 75 +). The estimates were adjusted for hysterectomy. Joinpoint regression analysis was used to assess trends over time and annual percentage changes (APCs) were estimated.

Pacific women had the highest incidence of endometrial cancer and the trend was increasing, particularly in young women. This could be attributed, at least in part, to a high and increasing rate of obesity in these women and should be explored in future research. 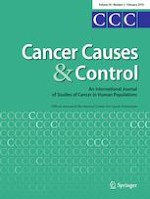 The Be-Well Study: a prospective cohort study of lifestyle and genetic factors to reduce the risk of recurrence and progression of non-muscle-invasive bladder cancer

Serum glucose, triglycerides, and cholesterol in relation to prostate cancer death in the Swedish AMORIS study

The association between longer relative leukocyte telomere length and risk of glioma is independent of the potentially confounding factors allergy, BMI, and smoking

Identifying optimal approaches to scale up colorectal cancer screening: an overview of the centers for disease control and prevention (CDC)’s learning laboratory

Correction to: The relationship between diabetes, prostate-specific antigen screening tests, and prostate cancer