Several rare inherited disorders have been described that show phenotypic overlap with Paget’s disease of bone (PDB) and in which PDB is a component of a multisystem disorder affecting muscle and the central nervous system. These conditions are the subject of this review article. Insertion mutations within exon 1 of the TNFRSF11A gene, encoding the receptor activator of nuclear factor kappa B (RANK), cause severe PDB-like disorders including familial expansile osteolysis, early-onset familial PDB and expansile skeletal hyperphosphatasia. The mutations interfere with normal processing of RANK and cause osteoclast activation through activation of nuclear factor kappa B (NFκB) independent of RANK ligand stimulation. Recessive, loss-of-function mutations in the TNFRSF11B gene, which encodes osteoprotegerin, cause juvenile PDB and here the bone disease is due to unopposed activation of RANK by RANKL. Multisystem proteinopathy is a disorder characterised by myopathy and neurodegeneration in which PDB is often an integral component. It may be caused by mutations in several genes including VCP, HNRNPA1, HNRNPA2B1, SQSTM1, MATR3, and TIA1, some of which are involved in classical PDB. The mechanisms of osteoclast activation in these conditions are less clear but may involve NFκB activation through sequestration of IκB. The evidence base for management of these disorders is somewhat limited due to the fact they are extremely rare. Bisphosphonates have been successfully used to gain control of elevated bone remodelling but as yet, no effective treatment exists for the treatment of the muscle and neurological manifestations of MSP syndromes. 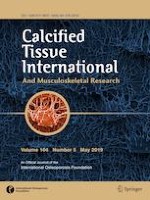 Melorheostosis and Osteopoikilosis: A Review of Clinical Features and Pathogenesis