Following determination of the maximum standardized uptake values (SUVmax) of the mediastinal lymph nodes (SUV-LN) and of the primary tumor (SUV-T) on 18F-FDG PET/CT in patients with non-small-cell lung cancer (NSCLC), the aim of the study was to determine the value of the SUV-LN/SUV-T ratio in lymph node staging in comparison with that of SUV-LN.

We retrospectively reviewed a total of 289 mediastinal lymph node stations from 98 patients with NSCLC who were examined preoperatively for staging and subsequently underwent pathologic studies of the mediastinal lymph nodes. We determined SUV-LN and SUV-R for each lymph node station on 18F-FDG PET/CT and then classified each station into one of three groups based on SUV-T (low, medium and high SUV-T groups). Diagnostic performance was assessed based on receiver operating characteristic (ROC) curve analysis, and the optimal cut-off values that would best discriminate metastatic from benign lymph nodes were determined for each method.

The SUV-R performed well in distinguishing between metastatic and benign lymph nodes. In particular, SUV-R was found to have a better diagnostic performance than SUV-LN in the low SUV-T group. 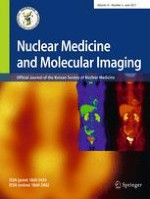