Osteoarthritis is a common disease with a prevalence of approximately 8.9% among the average population. One treatment option is low-dose radiotherapy. Some authors mention that they apply a second or third course of radiation for recurrent pain or partial or no response to the initial course. As the results of re-irradiation have not been analysed systematically, the aim of this study was to document the results of repeated radiation treatment and to identify those patients who will benefit.

The analysis was performed on patients of three German radiotherapy institutions and included 217 re-irradiated joints. Pain was documented with the numeric rating scale (NRS). Evaluation of the NRS was done before and directly after each radiation therapy as well as at the follow-up of 24 months.
The median age of the patients was 67 years, with 40% male and 60% female patients. Re-irradiation was indicated because the initial radiotherapy resulted in no response in 21.2%, in partial response in 41.5%, and in recurrent pain in 37.3%.

Re-irradiation of osteoarthritis is an effective and safe treatment. All subgroups showed a good response to re-irradiation for at least 24 months. 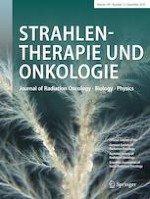