Local recurrence of pancreatic cancer occurs in 80 % of patients within 2 years after potentially curative resections. Around 30 % of patients have isolated local recurrence (ILR) without evidence of metastases. In spite of localized disease these patients usually only receive palliative chemotherapy and have a short survival.

To evaluate the outcome of surgery as part of a multimodal treatment for ILR of pancreatic cancer.

All consecutive operations performed for suspected ILR in our institution between October 2001 and October 2009 were identified from a prospective database. Perioperative outcome, survival, and prognostic parameters were assessed.

Of 97 patients with histologically proven recurrence, 57 (59 %) had ILR. In 40 (41 %) patients surgical exploration revealed metastases distant to the local recurrence. Resection was performed in 41 (72 %) patients with ILR, while 16 (28 %) ILR were locally unresectable. Morbidity and mortality were 25 and 1.8 % after resections and 10 and 0 % after explorations, respectively. Median postoperative survival was 16.4 months in ILR versus 9.4 months in metastatic disease (p < 0.0001). In ILR median survival was significantly longer after resection (26.0 months) compared with exploration without resection (10.8 months, p = 0.0104). R0 resection was achieved in 18 patients and resulted in 30.5 months median survival. Presence of metastases, incomplete resection, and high preoperative CA 19-9 serum values were associated with lesser survival.

Resection for isolated local recurrence of pancreatic cancer is feasible, safe, and associated with favorable survival outcome. This concept warrants further evaluation in other institutions and in randomized controlled trials. 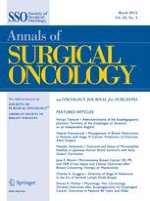 The Keystone Flap: Not an Advance, Just a Stretch

Management of Bowel Obstruction in Patients with Stage IV Cancer: Predictors of Outcome After Surgery

Preoperative Axillary Ultrasound and Fine-needle Aspiration Biopsy in the Diagnosis of Axillary Metastases in Patients with Breast Cancer: Predictors of Accuracy and Future Implications