Eighteen patients (17 M, 1 F; mean age 30.9 ± 7 years) were evaluated. Mean postoperative follow-up period was 22.1 ± 2.6 (range 18–26) months. Patellar tendons were shorter and thicker on the operated side when compared with the contralateral side (both p = 0.001). Patellar tendon strain ratios of the operated side were lower than the contralateral side (harder tendon on operated side). While there was no correlation between strain ratios and clinical variables (age, BMI, postoperative time, severity of pain, Lysholm score, all p values > 0.05), significant negative correlations were detected between strain ratios of proximal, middle and distal thirds of operated side and amount of smoking (p = 0.008, r = −0.607, p = 0.009, r = −0.598, p = 0.023, r = −0.533, respectively).

Patellar tendons on the operated sides seemed to thicken and shorten with decreased strain ratios at the donor side compared to the healthy side at an average of 2-year follow-up in patients with ACL reconstruction using BTB autograft, and amount of smoking had negative relationship with strain ratio of donor patellar tendon. 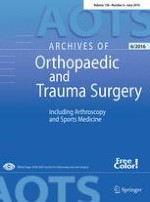 The efficacy of open partial aponeurectomy for recurrent Dupuytren’s contracture

Are people following hip and knee arthroplasty at greater risk of experiencing a fall and fracture? Data from the Osteoarthritis Initiative

Pain in donor site after BTB-ACL reconstruction with PRGF: a randomized trial