Between 2013 and 2018, the estimated number of new diagnoses of human immunodeficiency virus (HIV) infections in the US (US) was approximately 38,000 annually [ 1, 2]. According to the most recent data available (2018) from the Centers for Disease Control and Prevention (CDC), approximately 1.2 million people are living with HIV in the US [ 3]. Without treatment, HIV infection leads to the development of acquired immunodeficiency syndrome (AIDS) and eventually death. The introduction of antiretroviral therapy (ART) in the late 1980s transformed the treatment of HIV, such that the disease could be pharmacologically managed. Highly active ART medications effectively inhibit HIV replication and thereby significantly reduce disease progression to AIDS, increase survival and quality of life, and block viral transmission [ 4‐ 6]. However, to achieve sustained optimal viral suppression, a systematic review of numerous studies (2012–2016) of patients with HIV-1 (PWH) on ART regimens reported that a high level of adherence (≥ 90%) is necessary [ 7].
Anzeige
In 2019, the Pharmacy Quality Alliance, a nationally recognized organization in the US that provides consensus-based measures for medication safety, adherence, and appropriate use, also recommended ≥ 90% adherence to be considered as optimal for ART regimens [ 8]. The US Department of Health and Human Services (DHHS) guidelines for adults and adolescents living with HIV recommend multiple strategies to improve adherence to ART treatments, including providing uninterrupted access to care, motivation for ART initiation, the periodic assessment of adherence to ART and care, patient education on the importance of adherence, and the simplification of ART dosing, such as using a single-table regimen (STR) [ 9, 10]. The use of STRs has been found in several studies to be associated with improved adherence to ART regimens versus multiple tablet regimens (MTRs) among PWH [ 7, 11‐ 15] and in some studies was also found to be associated with improved outcomes, including higher levels of viral suppression, decreased hospitalizations, and lower medical costs [ 7, 11, 14].
A previous US study by Benson et al. [ 16] examined adherence to ART of PWH treated between January 2015 and September 2017 and found an average adherence level of 72%; their findings were stratified by US state, providing a state- and regional-level depiction of ART adherence for targeting intervention efforts. Since 2017, several ART medications, including STRs, have been developed and approved by the US Food and Drug Administration for the treatment of HIV-1; such changes in the treatment landscape of HIV-1 could potentially affect medication adherence. To address this topic, this study examined adherence to ART regimens among PWH across the US between July 2017 and September 2019; findings were stratified by US region and state.

A retrospective observational study was conducted using data from the Symphony Health Solution Integrated Dataverse (IDV ®) database from July 1, 2016, through September 30, 2019. The IDV ® database is a comprehensive source of longitudinal healthcare data for > 300 million patients throughout the US and its territories. Each patient is assigned a unique encrypted identifier, and a patient matching process is used to consolidate data gathered from data suppliers into records of their medical, hospital, and prescription activity. The anonymous longitudinal data include patient demographic information, health plan characteristics, medical service use (i.e., diagnosis and procedure codes), and pharmacy dispensing data.
The data source used for this study is comprised of administrative healthcare records that are deidentified and certified to be fully compliant with the Health Insurance Portability and Accountability Act patient confidentiality requirements. Institutional review board approval to conduct this study was not required because the study used only deidentified patient records and did not involve the collection, use, or transmittal of individually identifiable data.
Anzeige

Patients ≥ 18 years of age who were treated with ART between July 2017 and September 2018 were selected from the IDV database. ART was defined as either a combination regimen of 1 core ART medication and ≥ 1 other ART medication within a 14-day period following the pharmacy record of the core ART medication (MTR) or 1 STR. ART core medications included the integrase strand transfer inhibitors (INSTIs), dolutegravir and elvitegravir, the protease inhibitors, darunavir and atazanavir, and the non-nucleoside reverse transcriptase inhibitors (NNRTIs), efavirenz, doravine, and rilpivirine. The STRs included Atripla ®, Biktarvy ®, Complera ®, Genvoya ®, Odefsey ®, Stribild ®, (Gilead Sciences, Inc.), Dovato ®, Juluca ®, Triumeq ® (ViiV Healthcare), Symfi ® (Viatris, Inc.), Delstrigo ® (Merck), and Symtuza ® (Janssen Therapeutics). All ART medications were identified by IDV database-specific drug identifiers.
The date of the earliest pharmacy record for a core ART medication (with a record for another ART medication within 14 days) or STR was designated as the index date for a patient. Patients were required to have a diagnosis of HIV-1 based on the presence of an International Classification of Diseases, 10th Revision, Clinical Modification (ICD-10-CM) code indicating HIV-1 (B20, R75, and Z21) on a medical record during the 12-month baseline period prior to their index date or on their index date. Patients were also required to have ≥ 1 medical/pharmacy record ≥ 12 months after their index date (follow-up period) recorded in the data source to ensure that patients were not dropped from the database during the follow-up period. Patients were excluded from the study population if they had a diagnosis of HIV-2 (ICD-10-CM code: B97.35) during any time of the study period or if they had missing gender, age, or US state information. Both patients who had not been previously treated with ART, defined as having no ART use during the 12-month baseline period, and those who were treatment experienced (i.e., with a pharmacy record for an ART medication during the baseline period) were included in the study population. The selection process of patients is shown in Fig.  1.
×

Patient demographic and clinical characteristics, including age, gender, race/ethnicity, insurance type, Quan-Charlson Comorbidity Index (CCI) score (modified by exclusion of HIV/AIDS diagnoses), and select comorbid conditions, were evaluated during patients’ baseline period or on their index dates. All comorbid conditions were identified based on the presence of corresponding ICD-10-CM codes in medical records.

Adherence to index ART was measured during patients’ 12-month follow-up period using the proportion of days covered (PDC). The PDC was calculated as the sum of days during the follow-up period that were covered by either ≥ 2 ARTs (per defined MTR above) or 1 STR, divided by the number of days in the follow-up period (i.e., 365 days). Values for PDC range from 0 to 100% with higher values indicating higher adherence and “100%” indicating a patient who had complete ART medication adherence. The PDC was determined for all patients in the study population and stratified by US region and state. Additionally, the percentages of patients with adherence levels of < 80%, 80% to < 90%, and ≥ 90% (optimal adherence) were reported.

A sensitivity analysis was conducted on adherence to ART that only included patients who were newly treated with ART (i.e., no ART medication use during the 12-month baseline period).

For the descriptive analyses in this study, means and standard deviations (SD) were reported for continuous variables and counts and percentages for categorical variables. All data analyses were conducted using SAS ® 9.4 (SAS Institute, Cary, NC USA).

This large nationwide US study, including > 200,000 patients with HIV-1, found that adherence to ART was suboptimal or poor for > 60% of patients, with some small variations in adherence observed across US regions. More intensive implementation of interventions to improve ART adherence is needed in the US. As outlined by the DHHS [ 10], such interventions may include providing uninterrupted access to care, the periodic assessment of adherence to ART and care, patient education on the importance of adherence, and clinical consideration in the selection of ARTs with high genetic barriers to resistance for patients at risk of developing HIV-1 drug resistance because of low adherence.

The author team would like to thank Wing Chow, PharmD, MPH, a former employee of Janssen Scientific Affairs, LLC, for her contributions to the study design and study protocol.

Some aspects of this research were previously presented as a poster presentation at the live virtual American Conference for the Treatment of HIV (ACTHIV), May 20–22, 2021.

The data source used for this study is comprised of administrative healthcare records that are deidentified and certified to be fully compliant with the Health Insurance Portability and Accountability Act patient confidentiality requirements. Institutional review board approval to conduct this study was not required because the study used only deidentified patient records and did not involve the collection, use, or transmittal of individually identifiable data.

All data generated or analyzed during this study are included in this published article, or as supplementary material, or are available upon request from the corresponding author.
Open AccessThis article is licensed under a Creative Commons Attribution-NonCommercial 4.0 International License, which permits any non-commercial use, sharing, adaptation, distribution and reproduction in any medium or format, as long as you give appropriate credit to the original author(s) and the source, provide a link to the Creative Commons licence, and indicate if changes were made. The images or other third party material in this article are included in the article's Creative Commons licence, unless indicated otherwise in a credit line to the material. If material is not included in the article's Creative Commons licence and your intended use is not permitted by statutory regulation or exceeds the permitted use, you will need to obtain permission directly from the copyright holder. To view a copy of this licence, visit http://​creativecommons.​org/​licenses/​by-nc/​4.​0/​.

Below is the link to the electronic supplementary material.
Supplementary file1 (DOCX 28 KB) 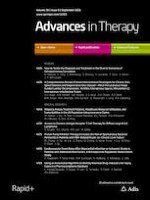