The dense fine speckled (DFS) pattern as detected by indirect immunofluorescence (IIF) on HEp-2 cells has been associated with several inflammatory diseases but is most commonly observed in individuals that do not have an antinuclear antibody (ANA)-associated rheumatic disease and even in apparently healthy individuals. Consequently, the accurate identification and correct reporting of this IIF pattern is of utmost importance and accordingly has been recognized by several international study groups for the detection of ANA. Furthermore, the DFS IIF pattern has recently been recommended as a competency level recognition pattern by the International Consensus on Antinuclear Antibody (ANA) Pattern (ICAP, http://​www.​anapatterns.​org/​) Committee. The objective of this study was to use an internet-based survey to assess how accurately the DFS IIF pattern was recognized by experienced technologists.

High-resolution digital IIF images were captured using the automated IIF NOVA View instrument (Inova Diagnostics, San Diego, CA). Ten images were posted in an anonymous, international, internet-based interpretive survey. Two hundred and thirty IIF technologists were invited to participate. Four of the images in the survey were from previously characterized serum samples with classical ANA IIF patterns (nucleolar, centromere, homogeneous, and speckled) and two of the images were from samples with a DFS IIF ANA pattern and isolated anti-DFS70 antibodies as determined by a chemiluminescence immunoassay. The remaining four images were from sera with the classic IIF ANA patterns referred to above and mixed with a monospecific anti-DFS70-positive sample. The survey included multiple choice selections: homogeneous, DFS, centromere, nucleolar, speckled, other, or unrecognizable.

125 of the 230 participants who completed the survey had diverse levels of experience in IIF pattern recognition on HEp-2 cells ranging from <1 year to >10 years of experience (average >10 years). Participants had a high concordance in correctly classifying the classical ANA IIF patterns: ranging from 95.2 % for centromere to 74.4 % for nucleolar patterns. The unmixed DFS pattern was recognized with significantly lower accuracy (~50 %; p < 0.05). However, less than 10 % correctly identified mixed patterns derived from the sera containing both clinically relevant ANA and anti-DFS70 antibodies. 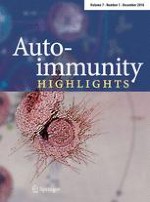