This work was presented orally as a poster at the American Urogynecology Society Meeting in 2017 in Providence, Rhode Island, USA. 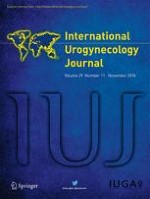 In defense of J Marion Sims