There is a lack of knowledge on respiratory and physical function, mobility and pain following stabilising surgery for ‘flail chest’. The purpose of this study was, therefore, to evaluate pain, respiratory function, range of motion and physical function/activity 3 and 6 months after stabilising surgery in patients with ‘flail chest’ due to trauma.

Twenty-four patients diagnosed with ‘flail chest’ were, 3 and 6 months after the trauma, measured with regard to remaining pain, lung volume, breathing movements, and range of motion in the rib cage and thoracic spine. Physical function and level of physical activity were also estimated.

Approximately 50 % of the patients had remaining pain after 3 months and 35 % had remaining pain after 6 months. Vital capacity was significantly decreased after 3 and 6 months compared to predicted values: >83 % after 3 months and >86 % after 6 months. There were no significant differences between the injured versus non-injured side in breathing movements, nor between the values of the range of motion between the two test occasions. The results of physical function showed mild to moderate disability 3 months after surgery and some or mild disability at 6 months. The patients were active, performing moderate exercise 1–2 h/week or light physical activities more than 4 h/week at 3 and 6 months. 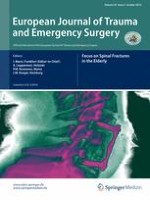 Focus on spinal fractures in the elderly

Cervical spine fractures in the elderly: morbidity and mortality after operative treatment