Twenty-three cases of GIST of lower third of rectum were treated at our centre from 2005 till 2015. NA imatinib was used in a dose of 400 mg. Response evaluation was done every 3 months with a pelvic magnetic resonance imaging. Surgical management was determined by a team of experienced gastrointestinal oncosurgeons.

Five patients underwent upfront surgery which included local resection in four patients and abdominoperineal resection in one patient. NA imatinib was used in 69.5 % (16/23) patients. Median duration of NA imatinib was 15 months (3–84 months). Amongst who underwent a sphincter-salvage surgery median duration of NA imatinib was 13 months whereas 18 months in patients who required a sphincter-sacrificing surgery (p = 0.683). The radiologic response included partial response in 75 % (12/16) patients, stable disease in 18.7 % (3/16) and one with progressive disease. Definitive surgical resection was possible in 13 patients (81.3 %) after NA imatinib. Median progression-free survival (PFS) was 120 months in the whole cohort whereas median overall survival (OS) was not reached. Four-year estimated PFS and OS was 81 % and 100 %, respectively. Median disease-free survival in upfront surgery group vs. neoadjuvant imatinib group was 70 vs. 120 months, respectively (p = 0.039).

Neoadjuvant imatinib appears to be a useful option in improving chances of sphincter preservation without adversely affecting the outcome. Use of neoadjuvant imatinib leads to improvement in progression-free survival in patients with GIST of lower third of the rectum. 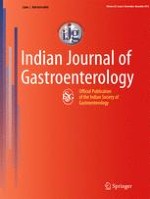 Should patients presenting with peptic ulcer bleed be screened to rule out cirrhosis of the liver?