The long-term patient and graft survival of IgA vasculitis in renal transplantation were comparable with the previous reports. The recurrence rate was 28.6 %, but none of the recurrent cases showed allograft loss in this study. We speculate that methylprednisolone pulse therapy and/or tonsillectomy prevent the progression of recurrent IgA vasculitis. 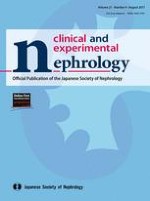