To estimate the incidence of recurrence of complaints and repeated interventions after hysteroscopic treatment for abnormal uterine bleeding in premenopausal women and to determine potential predictors for re-intervention.

This is a retrospective cohort study in two secondary care centers in the Netherlands. We included 313 premenopausal women who underwent hysteroscopy for complaints of abnormal uterine bleeding and who had intrauterine pathology visualized at ultrasound. The intrauterine structure was hysteroscopically removed. These women were compared with women who had a hysteroscopy for abnormal uterine bleeding, but in whom hysteroscopy showed no abnormalities. We used Chi-squared test for categorical variables and independent-samples T test for continuous variables. p Values less than 0.05 were considered to indicate statistical significance.

In premenopausal women with abnormal uterine bleeding, treatment of intrauterine pathology often does not reduce the complaints, thus questioning the effectiveness of hysteroscopic removal of these structures. 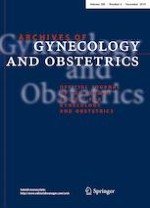 Puerperal mastitis in the past decade: results of a single institution analysis

Effect of embryo selection based morphokinetics on IVF/ICSI outcomes: evidence from a systematic review and meta-analysis of randomized controlled trials

A multicenter, double-blind, randomized trial on the bleeding profile of a drospirenone-only pill 4 mg over nine cycles in comparison with desogestrel 0.075 mg