The online version of this article (https://​doi.​org/​10.​1245/​s10434-019-07353-4) contains supplementary material, which is available to authorized users.
Liang-Shuo Hu and Xu-Feng Zhang have contributed equally to this study.

Recurrence of intrahepatic cholangiocarcinoma (ICC) after curative resection is common.

The aim of this study was to investigate the patterns, timing and risk factors of disease recurrence after curative-intent resection for ICC.

Patients undergoing curative resection for ICC were identified from a multi-institutional database. Data on clinicopathological and initial operation information, timing and first sites of recurrence, recurrence management, and long-term outcomes were analyzed. 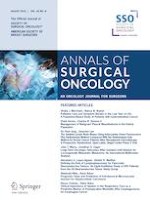 Predicting the Risk of Weight Loss After Esophageal Cancer Surgery

Palliative Care and Symptom Burden in the Last Year of Life: A Population-Based Study of Patients with Gastrointestinal Cancer