A 27-year-old man was diagnosed with IgA nephropathy and Crohn’s disease. He had been diagnosed with proteinuria and hematuria since he was 20 years old. Diarrhea had been a continuing problem during the past 5 months. Neither corticosteroid therapy nor tonsillectomy was performed. Hemodialysis was required at age of 30, while the symptoms of Crohn’s disease were ameliorated by an elemental diet. He received a renal transplant from his mother 4 months after starting dialysis therapy. The initial immunosuppression therapy consisted of methylprednisolone, mycofenolate mofetil, cyclosporine, and basiliximab. Eight months after transplantation, proteinuria and hematuria appeared and serum creatinine was 1.4 mg/dL. Relapse of IgA nephropathy was confirmed by the one-year protocol biopsy. He had suffered from tonsillitis at 32 months after the transplantation. Urinary protein increased to 3 g/day and serum creatinine was elevated to 2.04 mg/dL. Renal biopsy was performed 2 weeks after the urinary findings were aggravated. The cellular crescents constituted 36 % of the glomeruli. The findings of rejection were not confirmed in both biopsies. Tonsillectomy was performed thereafter. No additional immunosuppressive therapy was added. Proteinuria and hematuria disappeared at 4 and 20 months, respectively, after tonsillectomy, even when the symptoms of Crohn’s disease worsened 69 months and 89 months after transplantation. A renal biopsy was performed 101 months after transplantation. Although IgA in the mesangium area was confirmed by immunohistochemical staining, no active lesion was seen. Tonsillectomy along with immunosuppressants for the graft might be an effective treatment for some patients with active recurrent IgA nephropathy. 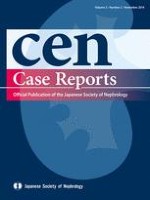