When taken with a meal, α-glucosidase inhibitors (α-GI) reduce the rise in postprandial glucose and increase glucagon-like peptide-1 (GLP-1), and this may lower bone turnover. In this study, a salacinol-type α-GI increased GLP-1 and markedly reduced postprandial bone resorption compared to placebo, suggesting it could have implications for bone health.

Animal and clinical trials indicate that α-glucosidase inhibitors attenuate postprandial glycemic indices and increase secretion of GLP-1. In addition, GLP-1 acts on bone by inhibiting resorption. The goal in this study was to determine if a salacinol α-GI alters postprandial bone turnover and can be explained by changes in serum GLP-1.

In this double-blind, placebo-controlled crossover study, healthy overweight/obese adults (body mass index 29.0 ± 3.8 kg/m2; 21–59 years; n = 21) received a fixed breakfast and, in random order, were administered Salacia chinensis (SC; 500 mg) or placebo. A fasting blood sample was taken before and at regular intervals for 3 h after the meal. Serum was measured for bone turnover markers, C-terminal telopeptide of type I collagen (CTX) and osteocalcin, and for glycemic indices and gut peptides.

This study indicates that attenuating postprandial glycemic indices, with an α-GI, markedly decreases postprandial bone resorption and can be explained by the rise in GLP-1. Future studies should determine whether longer term α-GI use benefits bone health. 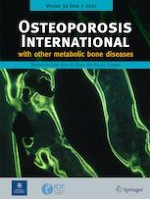 Pharmacotherapy decisions among postmenopausal women attending a group medical consultation or a one-on-one specialist consultation at an osteoporosis center: an observational cohort study

Over half of seniors who start oral bisphosphonate therapy are exposed for 3 or more years: novel rolling window approach and patterns of use