This study was initiated to establish the reference values (the 95 % lower limit in particular) for white blood cell (WBC) counts in peripheral blood of general Japanese population. Additional attempts were made to examine whether the reference range had changed in the past 100 years, and which factors had induced such change in WBC counts.

Data employed were WBC counts of >100 thousand apparently healthy Japanese men, collected in 2002 and in 2010, respectively. Information on smoking habits was collected simultaneously.

The distribution of WBC counts was essentially normal. Arithmetic mean (AM) WBC was 6,248 cells/mm3 in 2002 and 6,162 cells/mm3 in 2010. Based on the 2010 observation, 3 × 103 WBCs/mm3 (after rounding of the figure) was identified as the 95 % lower limit of the reference value for the population. No clear age dependency was detected. Smoking induced elevation in WBC, whereas WBC returned to the level of never smokers after quitting for 3 or more years.

Historical review disclosed a secular trend of decrease in WBC in the past 100 years, so that about 8 % of never-smoking men would be considered leukocytopenic according to the conventional cutoff of 4 × 103 cells/mm3 as a screening level. Decreased smoking rates and improved general hygiene are discussed as possible factors for WBC count reduction. Thus, WBC count of 3 × 103 cells/mm3 is recommended as the 95 % lower limit of the reference value for screening cases with reduced WBC counts. 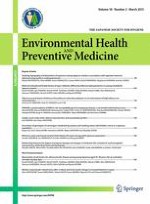