There is sparse evidence for return to sport criteria after knee injury. Functional performance deficits, particularly in fatigued muscular condition, should be verified prior to the attempt to return to high-risk pivoting sports. The purpose of this study was to generate reference values for the limb symmetry index (LSI) of healthy subjects in fatigued and non-fatigued muscular condition in a newly designed test battery.

The absolute jumping distance in the single-leg hop for distance was significantly reduced due to fatigue. No clinically relevant effect of muscular fatigue was observed on limb symmetry in our study sample. Gender and physical activity are important factors to be considered when interpreting reference values. 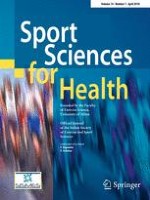 The effects of conventional and oval chainrings on patellofemoral loading during road cycling: an exploration using musculoskeletal simulation