Since neurophysiological and clinical trials have shown evidence for plasticity in the adult visual system, the upper age limit for amblyopia treatment is not rigid. The aim of this study was to investigate the efficacy of occlusion therapy and refractive adaptation in untreated amblyopic patients 12 to 40 years of age.

In a prospective study, all patients had full orthoptic and ophthalmic assessment including cycloplegic retinoscopy. Patients with a newly prescribed optical correction underwent an 18-week refractive adaptation. All patients were treated with occlusion for 3 h a day for 18 weeks. Acuity gain and responder rates (≥ 0.2 log units) were calculated. The rate of recurrence (visual acuity 9 months after end of the occlusion therapy; ≥ 0.2 log units) and the acuity gain after refractive adaptation were determined. Self-reported compliance to occlusion therapy was assessed.

In adulthood, compliance to occlusion therapy is even more challenging than in children. Noncompliance is the main reason for treatment failure. Only a few patients with acceptable compliance to occlusion therapy had a small but significant improvement of visual acuity. The results suggest that some adults with amblyopia retain a degree of cortical plasticity. We found that untreated adult amblyopic patients did not wear optical correction on the amblyopic eye. The highest treatment benefit was achieved by correcting refractive errors prior to following period of refractive adaptation. 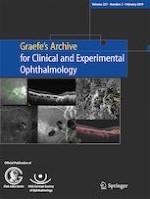 Effects of ripasudil, a rho kinase inhibitor, on blood flow in the optic nerve head of normal rats

Incidence and risk of ptosis following ocular surgery: a systematic review and meta-analysis

Asymmetric lacrimal gland enlargement: an indicator for detection of pathological entities other than thyroid eye disease