To describe regional differences in patient characteristics, ablation procedures, and bleeding events in the RE-CIRCUIT study. RE-CIRCUIT was a prospective, multicenter study that captured data from different regions, providing an opportunity to understand the practices followed in various regions. The incidence of major bleeding events (MBEs) was significantly lower with uninterrupted dabigatran versus uninterrupted warfarin.

Patients were randomized to receive dabigatran 150 mg twice daily or warfarin. Ablation was performed with uninterrupted anticoagulation for 8 weeks after the procedure. Regions were Western Europe, Eastern Europe, North America, and Asia.

Of 704 patients screened across 104 sites, 635 underwent catheter ablation (dabigatran, 317; warfarin, 318). Patient characteristics were different across various regions. Patients from North America had the highest prevalence of atrial flutter (33%), coronary artery disease (29%), diabetes mellitus (18%), and previous myocardial infarction (9%). Hypertension was most prevalent in Eastern Europe (75%), as was congestive heart failure (40% vs 2% in Western Europe). Pulmonary vein isolation alone was the preferred technique used in most patients (86% in North America and 75–83% elsewhere) and radio frequency was the preferred energy source. The major outcome measure, incidence of MBEs during and up to 2 months after the procedure, was consistently lower with uninterrupted dabigatran versus warfarin, irrespective of regions and their procedural differences, and different ablation techniques utilized.

This analysis shows that the benefits of dabigatran over a vitamin K antagonist in patients undergoing atrial fibrillation ablation are consistent across all geographic regions studied. 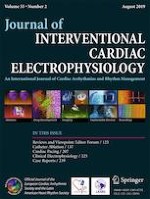 Pacemaker implantation in familial amyloid polyneuropathy: when and for whom?