To study regional trends in average years of potential life lost (AYPLL) among Caucasians (CA) and African Americans (AA) with prostate cancer (Pca) who received radical prostatectomy or radiation therapy among four different regions in the US as well as across different tumor grades. Years of potential life lost is defined as the difference between a predetermined end-point age and the age at death for a death that occurred prior to that end age, hence the AYPLL is calculated by dividing the total YPLL by the total number of patients died.

The surveillance epidemiology and end results (SEER) database was used to identify Pca patients who were CA or AA and who have received radical prostatectomy or radiation therapy. Study duration was divided into four decades; 1973–1982 (D1), 1983–1992 (D2), 1993–2002 (D3), 2003–2012 (D4). Examined regions were; North East (NE), North central (NC), South and West. Tumor grade was classified into; well/moderately differentiated (WD/MD) and poorly/undifferentiated (PD/UD) groups. Differences in AYPLL among CA and AA in each of these variables were compared.

Racial disparity between AA and CA existed across the examined regions. It is more pronounced in advanced tumor grades. The differences were more significant in the last decade. 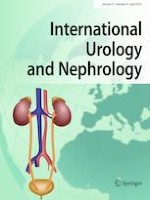 Development of symptomatic lymphoceles after radical prostatectomy and pelvic lymph node dissection is independent of surgical approach: a single-center analysis

How to estimate renal function in patients with liver disease: choosing the most suitable equation