To assess the efficacy and safety of regorafenib versus rechallenge chemotherapy in previously treated mCRC patients in third-line setting.

The data of 104 patients diagnosed with mCRC enrolled from 2010 to 2017 in six oncology centers were analyzed. Tumor treatment options were obtained from follow-up and treatment files. Rechallenge chemotherapy was identified as the re-use of the regimen which was previously administered to patients in one of the therapy lines and obtained disease control, these were the patients whose disease did not progress within 3 months.

Rechallenge is still a valuable option against regorafenib in patients who achieved disease control in one of the first two lines of therapy. Even though mCRC patients treated with regorafenib benefited clinically from this treatment, we revealed that chemotherapy rechallenge compared to regorafenib was more effective in the third-line treatment for mCRC patients. 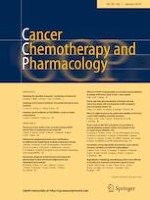 Real-world use of sunitinib in Japanese patients with pancreatic neuroendocrine tumors: results from a post-marketing surveillance study

A dose-escalation study of docetaxel, oxaliplatin, and S-1 (DOS) as a first-line therapy for patients with unresectable metastatic gastric cancer

Phase I study of BNC105P, carboplatin and gemcitabine in partially platinum-sensitive ovarian cancer patients in first or second relapse (ANZGOG-1103)