Fresh rhizome of Rehmannia glutinosa Libosch. (Saeng-jihwang in Korean: SJH) has been prescribed for the treatment of diabetes-associated complications. The purpose of the present study is to investigate the underlying mechanisms of the efficacy of SJH in diabetes-related complications. Decoction was obtained after boiling SJH in water and subsequent lyophilization. The cellular toxicity of SJH was determined by MTT assay. The antioxidant activity of SJH was measured by DPPH and DCFH-DA assays. The effects of SJH on inflammatory responses elicited by AGEs were assessed by western blotting and semi-quantitative RT-PCR analyses. The water extract of SJH had a high free radical scavenging activity in vitro and decreased the level of intracellular ROS in THP-1 cells treated with AGEs. SJH suppressed the expression of pro-inflammatory genes, including TNF-α, MCP-1, IP-10, COX-2, and iNOS; the activation of NF-κB; and the expression of RAGE, a receptor for AGEs, where the expressions of which were induced by AGEs. These results suggest the possibility that SJH can be an alternative therapeutics for diabetes-associated diseases. 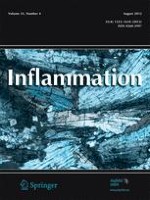 Pharmacological and Pharmacokinetic Studies with Agaricoglycerides, Extracted from Grifola frondosa, in Animal Models of Pain and Inflammation

Alteration of Some Inflammatory Biomarkers by Dietary Oxysterols in Rats