This study examined whether the mechanical characteristics of the cochlea could influence individual variation in the ability to use temporal fine structure (TFS) information. Cochlear mechanical functioning was evaluated by swept-tone evoked otoacoustic emissions (OAEs), which are thought to comprise linear reflection by micromechanical impedance perturbations, such as spatial variations in the number or geometry of outer hair cells, on the basilar membrane (BM). Low-rate (2 Hz) frequency modulation detection limens (FMDLs) were measured for carrier frequency of 1000 Hz and interaural phase difference (IPD) thresholds as indices of TFS sensitivity and high-rate (16 Hz) FMDLs and amplitude modulation detection limens (AMDLs) as indices of sensitivity to non-TFS cues. Significant correlations were found among low-rate FMDLs, low-rate AMDLs, and IPD thresholds (R = 0.47–0.59). A principal component analysis was used to show a common factor that could account for 81.1, 74.1, and 62.9 % of the variance in low-rate FMDLs, low-rate AMDLs, and IPD thresholds, respectively. An OAE feature, specifically a characteristic dip around 2–2.5 kHz in OAE spectra, showed a significant correlation with the common factor (R = 0.54). High-rate FMDLs and AMDLs were correlated with each other (R = 0.56) but not with the other measures. The results can be interpreted as indicating that (1) the low-rate AMDLs, as well as the IPD thresholds and low-rate FMDLs, depend on the use of TFS information coded in neural phase locking and (2) the use of TFS information is influenced by a particular aspect of cochlear mechanics, such as mechanical irregularity along the BM. 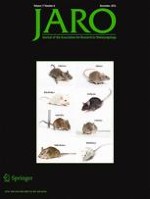 Application of Mouse Models to Research in Hearing and Balance